Gradient descent is a first order iterative optimization algorithm for finding the minimum of a function. To find a local minimum of a function using gradient descent, one takes steps proportional to the negative of the gradient of the function at the current point. If instead one takes steps proportional to the positive of the gradient, one approaches a local maximum of the function which is known as gradient ascent.

Stochastic gradient descent (SGD) is a stochastic approximation of the gradient descent and iterative method for minimizing an objective function. First SGD was used with each training example (one batch), but these days, we used mini-batch for better performance which is also called mini batch gradient descent.

The estimate of the gradient using minibatch is formed as,

where \(\epsilon\) is the learning rate. 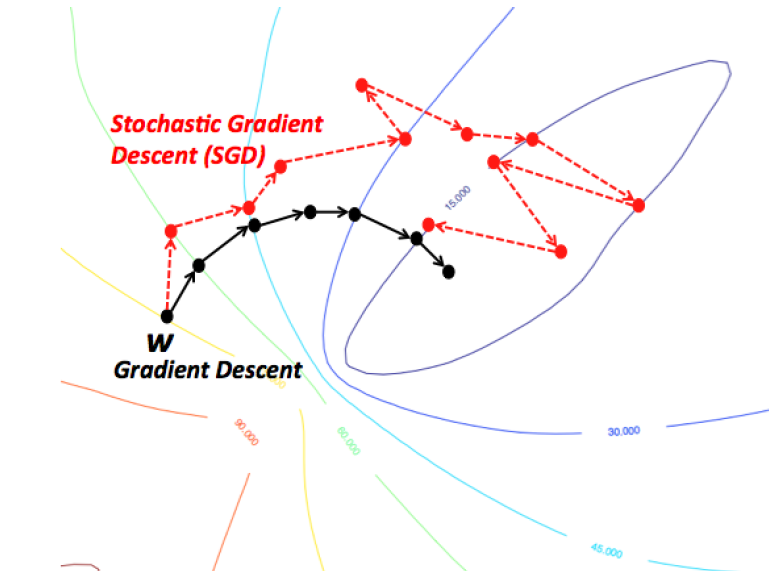 SGD has high variance oscillations and it makes hard to reach convergence, especially in ravines. In order to handle this problem, momentum is introduced to accelerate SGD by navigating along the relevant direction and softens the oscillations in irrelevant directions. SGD with momentum remembers the update \(\triangledown w\) at each iteration, and determines the next update as a linear combination of the gradient and the previous update.

Nesterov Accelerated Gradient (NAG) solve the problem of momentum technique which could cause to miss the minima because of high momentum at the point. This technique first make a big jump based on the previous momentum then calculate the gradient and then make an correction which results in an parameter update. This anticipatory update prevents us to go too fast and not miss the minima and makes it more responsive to changes.

Adagrad that maintains a per-parameter learning rate that improves performance on problems with sparse gradients (data). It increases the learning rate for more sparse parameters and decreases the learning rate for less sparse ones. This strategy often improves convergence performance over standard SGD in settings where data is sparse and sparse parameters are more informative. Examples of such applications include natural language processing and image recognition. It has a base learning rate \(\eta\), but this is multiplied with the elements of a vector \(G_{j,j}\) which is the diagonal of the outer product matrix.

This vector is updated after every iteration. The formula for an update is now

or, written as per-parameter updates,

Adadelta is an extension of Adagrad which handled the decaying learning rate problem of Adagrad. Instead of accumulating all previous squared gradients, adadelta limits the window of accumulated past gradients to some fixed size \(w\).

The sum of gradients is recursively defined as a decaying average of all past squared gradients. The running average \(E[g^2]_t\) at time step \(t\) then depends only on the previous average and the current gradient

We set \(\gamma\) to a similar value as the momentum term, around 0.9. For clarity, we now rewrite our vanilla SGD update in terms of the parameter update vector \(\Delta \theta_t\):

The parameter update vector of Adagrad that we derived previously thus takes the form:

We now simply replace the diagonal matrix \(G_t\) with the decaying average over past squared gradients \(E[g^2]_t\):

As the denominator is just the root mean squared (RMS) error criterion of the gradient, we can replace it with the criterion short-hand:

Root Mean Square Propagation (RMSProp) that also maintains per-parameter learning rates that are adapted based on the average of recent magnitudes of the gradients for the weight (e.g. how quickly it is changing). This means the algorithm does well on online and non-stationary problems (e.g. noisy).

Adaptive Moment Estimation (Adam) is another method that computes adaptive learning rates for each parameter which is combination between Adagrad and RMSprop. In addition to storing an exponentially decaying average of past squared gradients \(v_t\) like Adadelta and RMSprop, Adam also keeps an exponentially decaying average of past gradients \(m_t\), similar to momentum:

\(m_t\) and \(v_t\) are estimates of the first moment (the mean) and the second moment (the uncentered variance) of the gradients respectively. As \(m_t\) and \(v_t\) are initialized as vectors of 0’s, the authors of Adam observe that they are biased towards zero, especially during the initial time steps, and especially when the decay rates are small.

They counteract these biases by computing bias-corrected first and second moment estimates:

They then use these to update the parameters just as we have seen in Adadelta and RMSprop, which yields the Adam update rule:

After the Adam optimizer was introduced, few studies began to discourage to us Adam and showed several experiments that SGD with momentum is performing better. In the end of 2017, Ilya Loshchilov and Frank Hutter announced improved version of Adam optimizer in the paper The Marginal Value of Adaptive Gradient Methods in Machine Learning. They pointed out that the way weight decay is implemented in Adam in every library seems to be wrong and proposed a way to fix it called AdamW.

The main contributions of the AdamW paper is to improve Adam’s performance: 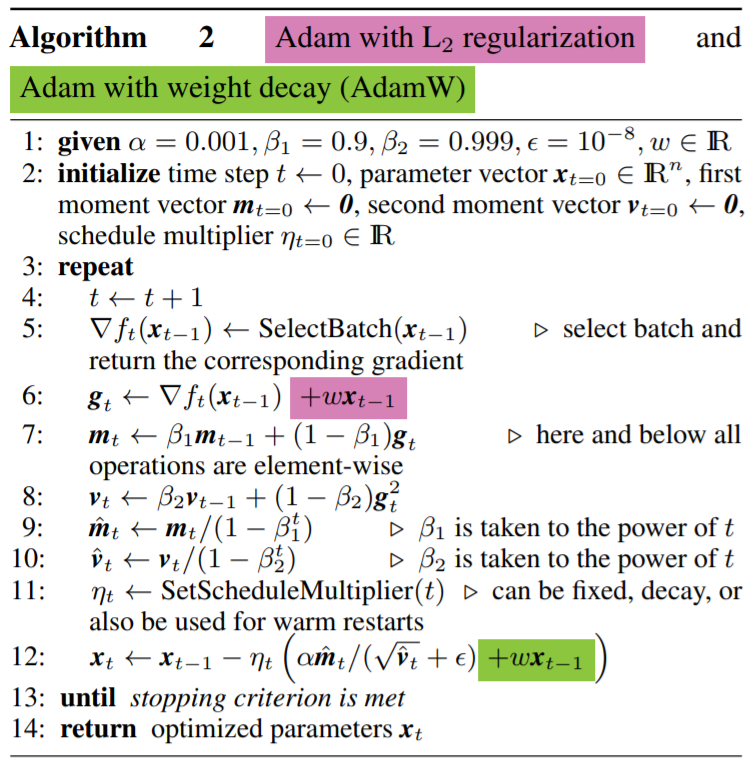 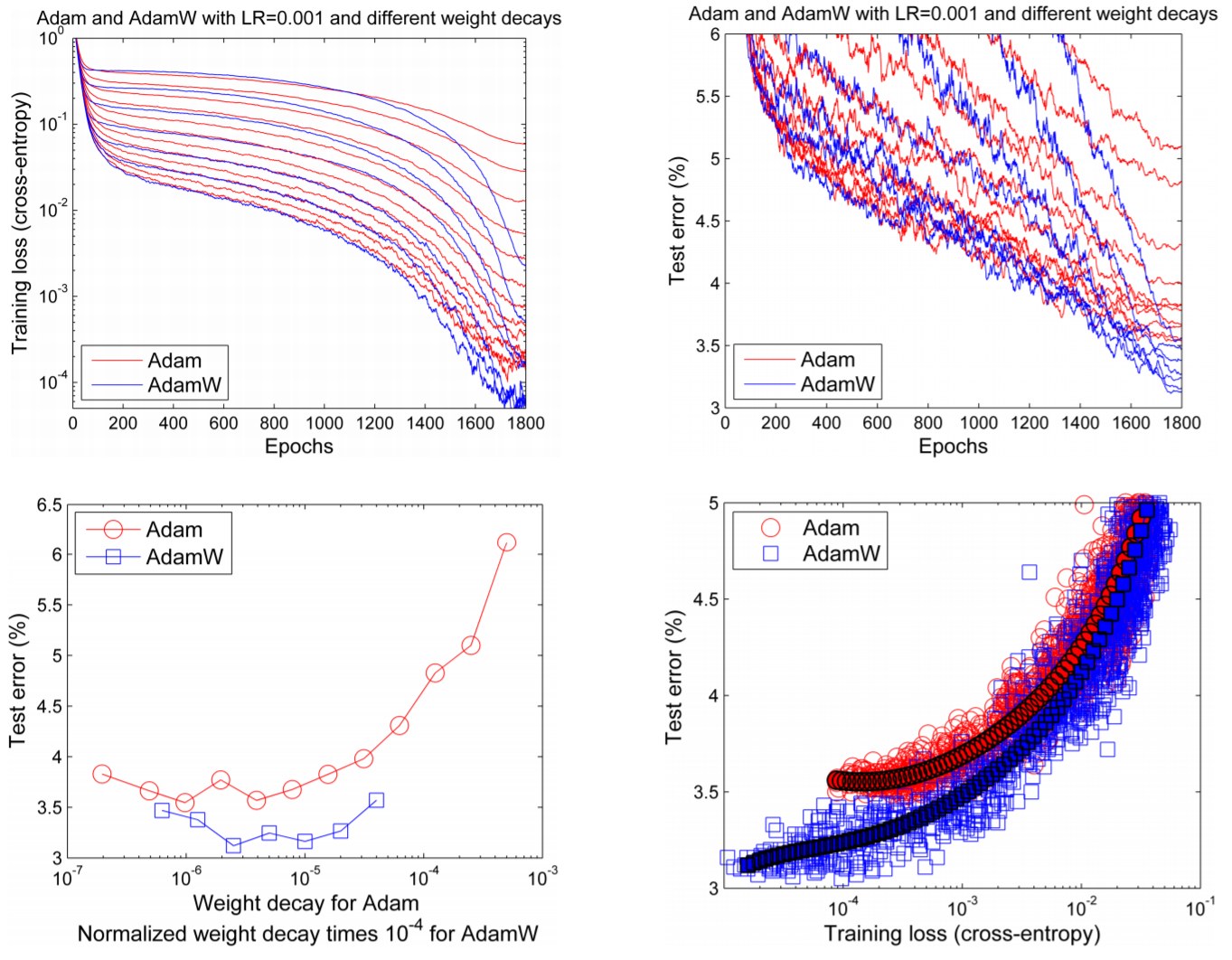 As shown in below images, the adaptive learning-rate methods, i.e. Adagrad, Adadelta, RMSprop, and Adam are most suitable and provide the best convergence for these scenarios.

Which Optimizer to Use?